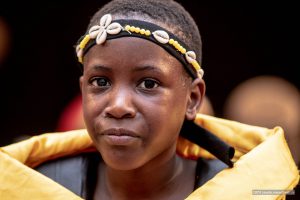 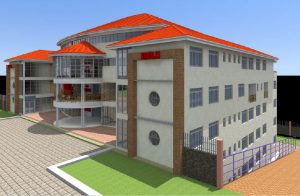 The Idea of IMLS

“Music is the only international language that doesn’t need to be translated” said Berthold Auerbach (1812 – 1882), a German author. Music can unite people in the whole world, produce unity and harmony in the community and can guarantee social and financial assurance for a better future most especially if taken to a professional level.

For this reason, Joseph Wasswa, a musician, a cultural scientist, a winner of the Promotion Cultural Award in Regensburg/Germany (2016), a  winner of the Germany Promotion Award for people with migration backgrounds, a PhD Student at the University of Regensburg under the sponsorship of the “Hanns-Seidel-Stiftung” Foundation in Germany, initiated right from the year 2011 the ambitious Project IMLS “International School of Music, Languages and Polytechnic Studies” as an academic institution and center of culture in the city of Masaka in Uganda/East Africa.

IMLS: The meeting point for everyone 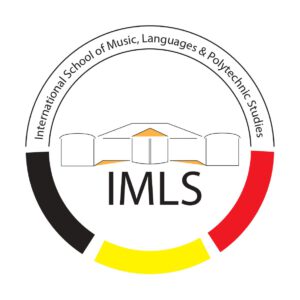 The International School of Music, Languages and Polytechnic Studies (IMLS) is the only Music school in Masaka. As most of the music schools in Uganda are centered around Kampala near the city centre, IMLS seeks to extend services closer to the unprivileged children and youths deep in the villages of Masaka and its surroundings who would otherwise never have had access to such a golden chance of exploiting their music talents, gaining self-confidence and  making themselves ready to face the future with self-sustainability.

More to that, the IMLS is a a meeting place for international musicians and cultural scientists, ethnomusicologists, tourists and people who are interested in promoting and emerging East-African and European cultures. Bring your experience whenever you are to the Pearl of Africa – Uganda in order to nurture the young generations. Through different workshops, courses and lectures from native and international musicians, volunteers and music experts, children as well as adults will be offered an opportunity to improve their technical Know-How. 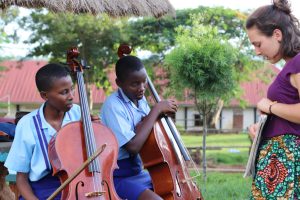 Besides the maintenance of the African cultural heritage in the teaching course “Ethnomusicology”, other courses taught include; playing music instruments such as Piano, Saxophone, Flute, Guitar, String and Brass instruments together with African Dance and courses such as Voice training, among others, to enhance music and cultural environment in the country. Workshops with international guests are intended to provide knowledge to children and interested individuals as well as big groups (e.g. Choirs, School classes, Orchestra etc.), as well and also language and computer courses. Furthermore, the audio- studio will give the musicians and composers the necessary environment to record, publish, and therefore, make them known to the world.

Everyone is therefore welcome to experience the power of music to unite people and also to get to know people of different colors and cultures. This will in a way reduce conflict in Uganda brought about by the historical identification of Ugandans because of their different ethnic backgrounds.

Music is on the rise in Uganda

The history of Africa has not come to a standstill, and to a larger extent it is not only portrayed in the media as a poor continent with old cliché but also as one of the first developing part of the world. For instance, Uganda has recorded a drastic reduction of poverty rate to 30% in the previous years. Since the general interest for music has increased and because for many people music is part of their life, they are therefore ready to give out money for concerts or buy music CDs of their favorite musicians. This can clearly explain why Ugandan musicians and artists, who today produce Pop-, Gospel-, or African-music, belong to the well-to-do people of the country. This has increased the demand for audio and video recording studios in the country.

The positive effects of Music

On top of that, neuroscientists proved how music influences the intellectual capacity of a person in the process of growth. Fireworks are created and the brain is engaged in different activities in which information is accessed in an interrelated way. The visual, motoric and auditory spheres are practically engaged and improved. Music increases the volume of thinking and solving problems. On top of that, the activities in the brain’s Corpus callosum are strengthened. This is the bridge between the two hemispheres (left and right brain) that allow messages to cross faster through diverse rates most especially if one plays an instrument. Mathematical and linguistic skills are therefore improved. This concept has been implemented in all the federal states of Germany and for sure in many developed countries. The level of integrity and intellectuality that young musicians prove, has been documented in the academic statistics of these countries. This golden chance should be given to all children in Africa. 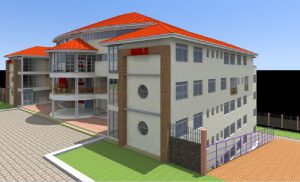 The planning of the IMLS has been running since 2011. In 2012, a Euro-African “Himbisa Mukama” charity concert was organized in Regensburg to raise funds for the construction. Further charity concerts and donation projects are still needed to raise more funds especially for the new building as seen here.

The building is being constructed in phase because of inadequate funds and will be made of five floors to cater for music, languages, vocational and business studies. The building is planned with concert-, conference-, offices-, recording-, practice- and bedrooms.

The bedrooms are planned for guest teachers, well-wishers, students, teachers and elders from Uganda and the entire world who are ready to share their knowledge and expertise through their participation in the project.

For a detailed insight into the IMLS: Watch this video!